In July of 2012 I enjoyed the opportunity to work for H2Outfitters.  I was on the water everyday for my four week vacation.  As many would think it was a working vacation.  And the time away from home helped me focus on a few things.

As a paddler we tend to focus just on the water; the reality is water is the tie that binds us and the kayak is a vehicle to find something.  What I found in Maine was food.  I ate lobster, lots of lobster.  How could I say no when it was only five dollars a pound.  The lobster was so plentiful I could buy it directly from the fisherman that caught it, only minutes ago.

My day began at 5 am.  Now this is surprising to Sean and everyone who knows me, for  I do not rise early, nor am I lively before 7am.  Upon waking I ate a lobster salad, took the dried PFDs and skirts of the clothes lines, packed up the truck, drove to the shop, unpacked, unlocked the kayaks, unlocked the shop, and prepared for the 8am morning rentals.  From 8am to 8pm I ran the shop, taught classes, managed rentals, and led two four person tours.  One tour was mid day and the other was a sunset paddle.

With a tight schedule I did squeeze in a lunch.  I ate some great chowder from the Salt Cod Cafe.  The chowder sometimes had pieces of lobster in it.  I consumed gallons of Eli’s Orange Pop.  And yes I occasional had a Whoopie Pie, yum.

After 8pm I closed the shop, loaded the truck with wet PFDs and skirts, and drove to the house I was staying at.  Then I washed the PFDs and skirts and placed everything on the clothes lines.  After all of the work was done I grabbed a bite to eat, did the hygiene stuff, watched a movie with Jeff and Cathy, called my wife, and went to bed around 11pm.

That was my normal routine.  Occasionally a guest would tip me with dinner or drinks at one of the local hangouts.  And some mornings I would have breakfast at BIGS.

I knew it was going to be work because their window of tourist sales is short.  Granted I was not prepared for perfect weather everyday.  Typically they have fog some mornings, with a little light rain midday.  Everyday I was there was sunny, warm, no rain, and no fog.  It was also funny when the locals remarked about how humid it was.  For this Florida boy, there was no humidity.

Between doing all of that aforementioned stuff around the shop I made time to dress up the shop.  With more than ten years of retail management experience, I have a critical eye when it comes to sales, for I was a jewelry manager.  I dusted, scrubbed, and merchandised products to maximize desirability.  I even suggested a new chart/advertisement that guests could use.  On one side was a chart of the local waters that they were enjoying.  On the flip side was a class menu of what we offered.  And the best thing was they could mass produce it in-house on waterproof paper.

The best part in Maine was when Mark, a local guide, and I paddled with a Boy Scout Troop for five days and four nights.  Mark asked me what we were getting ourselves into when he discovered that we were on the water with ten youths, 13 to 17 years old, and four adults.  Mark was accustomed to paddling with active adults in their mid 30’s to 50’s.  I assured him that it was going to be a relaxing ride in the country or it was going to be a roller coaster of torment.  All I had to do was ask two questions.  He was very puzzled with that statement.

We got to the boat launch unloaded the seven tandems, our single kayaks, and all of the kit.  Then waited as we ate Wicked Whoopie Pies.  Not to digress, but yum!  Everyone arrived in two large vans.  We greeted them, I found out who the Scout Master was and asked my first question, “Could you introduce me to your Senior Patrol Leader?”  He smiled and and quickly introduced me to their SPL.  I introduced Mark and myself than asked the youth “what is your float plan for the next five days?”  He grinned from ear to ear and said he has been looking over the charts for two weeks, he has a few places in mind for camping, and then wanted to know if he could organize the scouts to get the gear dispersed among the kayaks.  After his answer I smiled to Mark and whispered “hold on you are in for a treat”.

I will post the rest of the story in five days: 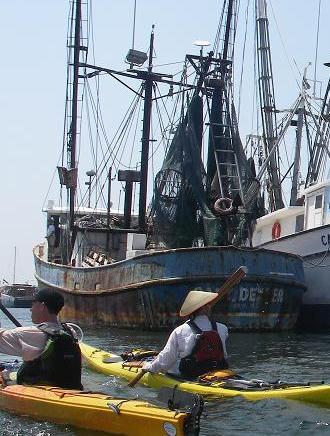