…even Sean was not up to the idea of paddling Sunday.  But I wanted to play with that NDK Greenlander Pro.  I took Russell’s kayak out on the water to see if his modifications to the cockpit would hinder my comfort.  The factory did not install the foot pegs.  Instead of foot pegs the bulkhead was moved in closer and padded with thick water repellent foam.  The boat also has the NDK high performance seat.  Russell also removed a part of the back band support to make it easier to assemble the kayak (it is a two piece kayak).  So, to give me a little support I placed my first aid kit behind the seat and placed my sleeping pad on top of it.

I was on the water for about five hours sprinting and edging all over the inter-coastal waterway.  I have been feeling a little rusty with my edging and the days weather was a great way to erase my rust.  Also as of late, I have just focused on endurance.  Slow and steady is good but I wanted to develop and challenge my muscles by maintaining a higher than normal speed.

Russell had the bulkhead moved closer and with the added padding on the bulkhead made for a fun experience.  I could shifting my weight and position my foot anywhere and remain in contact with the boat.  My feet were very happy with the lack of foot pegs.  I did several 20 to 30 minute sprints in an attempt to maintain a speed of 5.5 too 6 miles per hour.  I found it easy to maintain that speed.  Moreover, there was no discomfort pressing into the foam with my feet.  Foot pegs sometimes cause discomfort on the ball of my foot during dynamic movements.  And my body felt great and flowed unrestricted with in the cockpit.

I knew that nearby was a kayak trail hidden in a cluster of mangroves.  So I took the opportunity to explore my ability of boat control.  Mangrove tunnels are the Florida equivalent to a slalom course.  Granted a paddler may end up with more than a two-second time penalty for touching a mangrove pole.  The trees could actually take your paddle, that is why some people use a canoe paddle within mangroves.  Beyond that, the hard chine of that NDK boat carved the water like it was soft butter. 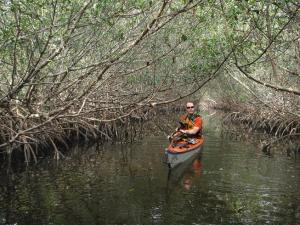 The water was low and slow as I paddled in the mangroves.  I even took a moment to pose for a picture.  It was a challenge to tie my camera to a tree limb and paddled backwards before the camera’s timer went off.  But most notably it was very quiet.  No sounds from birds, insects, crabs, water, or even the wind.  This was unsettling in a way for in the inter coastal water way the wind howled and the water spat.

Inside the dense mangroves I did come across several birds.   I only got a picture of one.  And it was statue like.  I took a few pictures then paddled out into the wind.

From there I paddled to an island to stretch my legs and put on a shell.  The wind was 90′ to my port side. With a little edging I paddled this sea kayak with no weathercocking.  I did not even need the skeg.  For a West Greenland design the chine of the kayak makes it a rock solid expedition kayak.

I got to the island in record time.  But before I got out of the kayak I discovered a horseshoe.  I have seen several horseshoe crabs but never a horseshoe!  How it got there is anyone’s guess.  I thought it was a lucky omen for the Steelers.  But I guess the team played like they were soaking their heals in saltwater.  Rust. Rust. Rust.

Never the less, it was a great day to be on the water.  And the Steelers will shine next year – Jeff