With late Spring/early Summer at hand it is a great time to be a paddler! For those who follow Jeff & I through our paddling adventures it has been a long time since I posted anything, that is because we have both been so busy paddling since the weather got better we have not had much time to write. Jeff has been adding some postings as he has time and I much appreciate it! So now it is my turn to contribute. Read on and I hope you enjoy the story of my most recent trip and how I played hookie on Saturday:

Saturday (05/07/11) morning began bright and early at 6:00 a.m with loading paddling gear into my SUV then heading for Peggy’s house to meet up with Kevin, Lee, & Caroline (paddling friends from our local FLOAT meetup group) to head for Nobleton,Fl. to paddle a new section of the Withlacoochee River. Nobleton is a spec on the map, but what they do have is access to the river at a nice little boat ramp.

The 5 of us left the house about 7:00 a.m. in Kevin’s truck, and as we headed out on the Howard Franklin Bridge, the sun was just peaking over the city of Tampa and the sparkling blue waters of Tampa Bay. We went through the city and its concrete jungle on our way to our paddling paradise- even if only for a few hours of solitude and paddling companionship. We stopped on Interstate 75 in Wesley Chapel,Fl. for a sit down breakfast at Cracker Barrel. YUM!! I highly recommend the Smokehouse Breakfast- yes, Lee that was for you. Inside Joke- the waitress kept telling Lee it was cheaper to get that particular breakfast instead of just eggs and sausage, which was actually cheaper than smokehouse option. Anyways……………….

Breakfast was delicious just the same and we were soon on our way again. We arrived at the launch just as the rest of the group did; around 9:30 a.m. The temp. was around 75 degrees and just beautiful with the sun shining bright as we all unloaded our kayaks and gear. Some people went to drop vehicles off at the landing site and soon returned so we could begin our paddle. 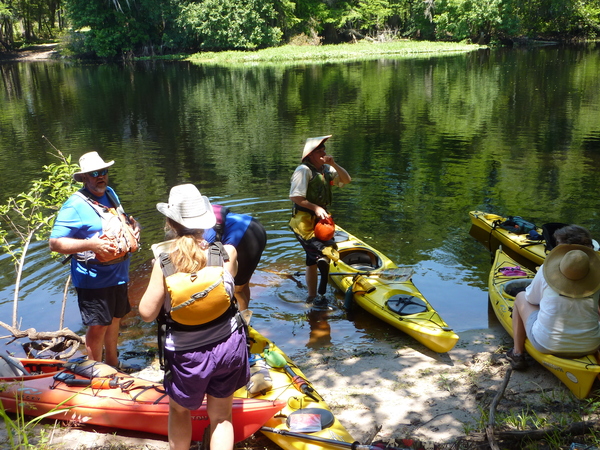 We headed out 12 strong down the Withlacoochee river for our little adventure. The river here is a little wider than other sections of the river I have paddled, but none the less awesome. The sides of the river are hardwood forest trees with lots of green, makes sense with the Withlacoochee Forest on both sides. The water is tannin stained brown/black which makes for perfect reflections on the water of the sky and surrounding trees! I felt numerous times like I was up north paddling in North Carolina or Tennessee somewhere. The water temp was cool and refreshing as there are springs that feed the river along its “crooked” path, which by the way is what Withlacoochee means in Native American.

We saw many forms of wildlife on the river including: an alligator, great blue heron, lesser blue heron, numerous limpkins, ibis, a brown-banded water snake(non-poisonous), snowy egret, many freshwater turtles, endangered sandhill cranes, hawks, wood storks and a partridge in a pear tree- OK, I made that last one up, but we saw lots and I am sure I missed something. The paddling was lazy with the conversations flowing naturally just like the river. We stopped along the bank and had a 30 minute lunch break that everyone enjoyed by the sounds of chewing that replaced the earlier conversations. I forgot to mention that there were also areas of clogged water lily pads and hydrilla along the way which added to the rivers charm and change in scenery- where you almost felt like you were on the Amazon somewhere.

We did 9 miles & 4 hours total paddling and ended our trip at the takeout ramp on Hwy. 48. As Kevin went back to get the truck, several of us played with side-by-side eskimo assisted rescues and I did a forward paddle float roll to demo how you could cool off with a roll and come up using just your paddle float on the front or back deck of the kayak. Then Kevin called and it was time to paddle in and load gear and boats for the journey back home- DARN! foiled again & I would have gotten to paddle longer if it hadn ‘t been for that meddling Kevin!!! ( Thanks various bad guys from Scooby Doo).

Oh Yeah- Did I mention that Sweetwater Kayaks– the shop I work for-  was having their 3rd annual Paddle for the Cure!!! Yes I probably should have been there helping Russell & Jeff out to make sure things went well behind the scenes…………………….. but I was playing “Hookie” in the warm Florida sunshine & the cool Withlacoochee water! OOOPS!!!( Can You Blame Me?) Hopefully Russell & Jeff will forgive me. I heard they had lots of help and volunteers so maybe I was not missed so much. I HOPE………… but I here a good time was had by all who attended & things went smoothly. Who knows maybe Jeff will do a post on it in the future.